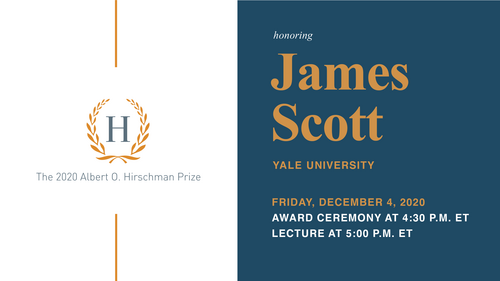 who will speak on "In Praise of Floods"

A virtual event link will be sent to all participants prior to the ceremony.

His wide-ranging and impactful publications, including Domination and the Arts of Resistance (1985) and Weapons of the Weak: Everyday Forms of Peasant Resistance (1980), explore political thought, movements, and resistance in Southeast Asia and beyond. Domination and the Arts of Resistance: Hidden Transcripts (1992) mined folktales, popular songs, oral interviews, and other sources from around the world to get at the “secret discourse” that subordinate groups used to critique dominant elites. His most influential book, Seeing Like a State: How Certain Schemes to Improve the Human Condition Have Failed (1998), pulled examples from many parts of the globe and from history to make the case that top-down planning has done more harm than good to the populations it was supposed to help. He followed up the political implications of that book in 2012 with Two Cheers for Anarchism: Six Easy Pieces on Autonomy, Dignity, and Meaningful Work and Play. More recently, he has turned to ancient history with Against the Grain: A Deep History of the First Agrarian States (2017), in which he explored the costs to humankind of the agrarian revolution.

About the Albert O. Hirschman Prize

Awarded every two years, the Hirschman Prize is the highest honor of the Social Science Research Council. It recognizes excellence in research, theory, and public communication, in the tradition of German-born American economist and Institute for Advanced Study professor Albert O. Hirschman’s pioneering role in social science and public policy. Exploring theory and practice, the history of ideas—economic, social, or political—and innovative approaches to fostering growth, Hirschman saw scholarship both as a tool for social change and as an inherent value in a world in need of better understanding. He wrote in ways that help social science effectively inform public affairs. His work stands as an exemplar of the necessary knowledge that the Council seeks to develop and the interdisciplinary and international approach that it champions.